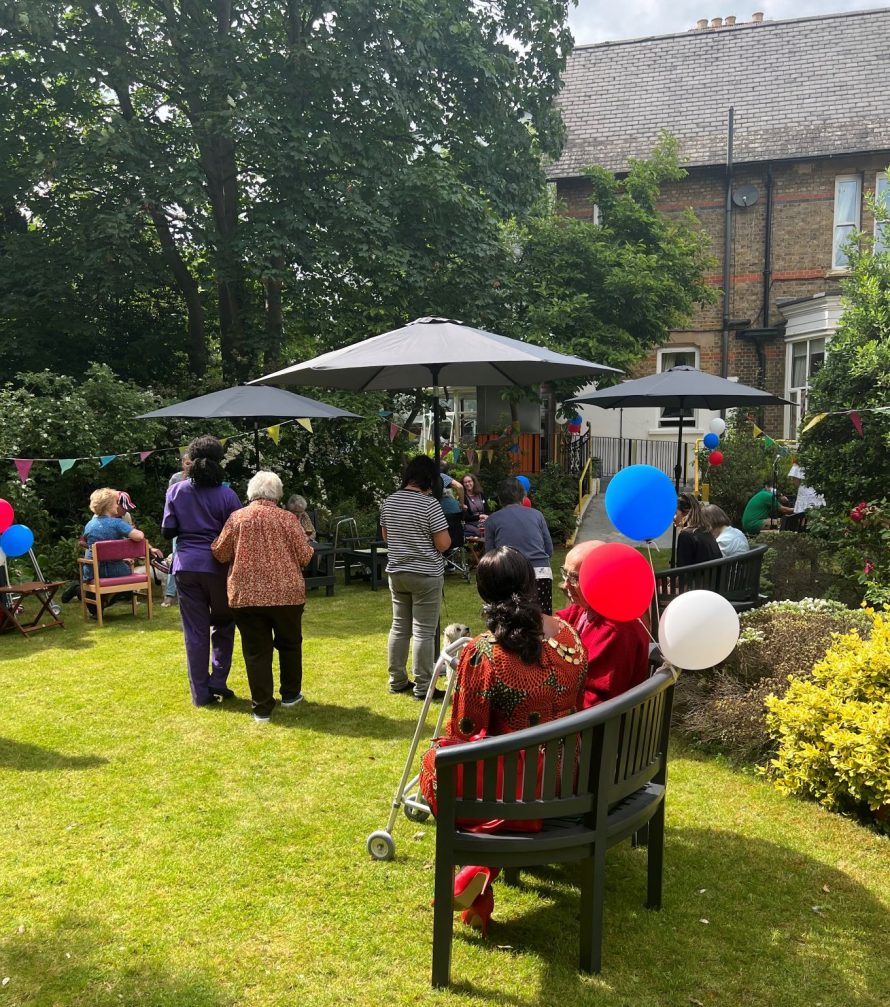 At Alexander House a Garden Party had been planned for the Friday afternoon of the long Jubilee weekend, and the sun stayed with us as people living and working there gathered in the beautiful garden, joined by family and friends.  Families sat in groups in the peaceful surroundings and they included some very young children so that in one or two cases, four generations of the same family were celebrating the Platinum Jubilee together.  I sat with people who did not have visitors on this occasion – Prudence told me how much she liked sitting in the garden and even helping with gardening at times.

The guest of honour was the Mayor of Merton and she went around chatting with residents and visitors, accompanied by the Registered Manager.  A highlight of the afternoon was the planting of a tree as part of the Queen’s Green Canopy project, a unique tree-planting initiative to mark the Platinum Jubilee.  A peach tree had been chosen and hole dug near the summer house in preparation.  The Mayor placed the sapling in the prepared hole, and Prudence was thrilled to be the first person to help establish the little tree by using a spade to place compost over the roots.  Most if not all the other people living at Alexander House who were in the garden that day then followed with more soil, amid enthusiastic cheers from the onlookers.

Food and drinks had been beautifully set out in the summer house including a special Jubilee cake baked by one of Alexander House’s chefs.  She had created a Union Jack cake decorated with cream, raspberries and blueberries.

While we were enjoying the delicious food, the granddaughter of a lady living at Alexander House provided live entertainment by singing solos of classic songs.  For much of the rest of the time, the national anthem was being played on a loop – maybe a little too often.  But for the lady sitting next to me on the garden bench, it was not too often.  She hummed along to the music each time it was played and no doubt, it evoked memories of past national celebrations for her each time.